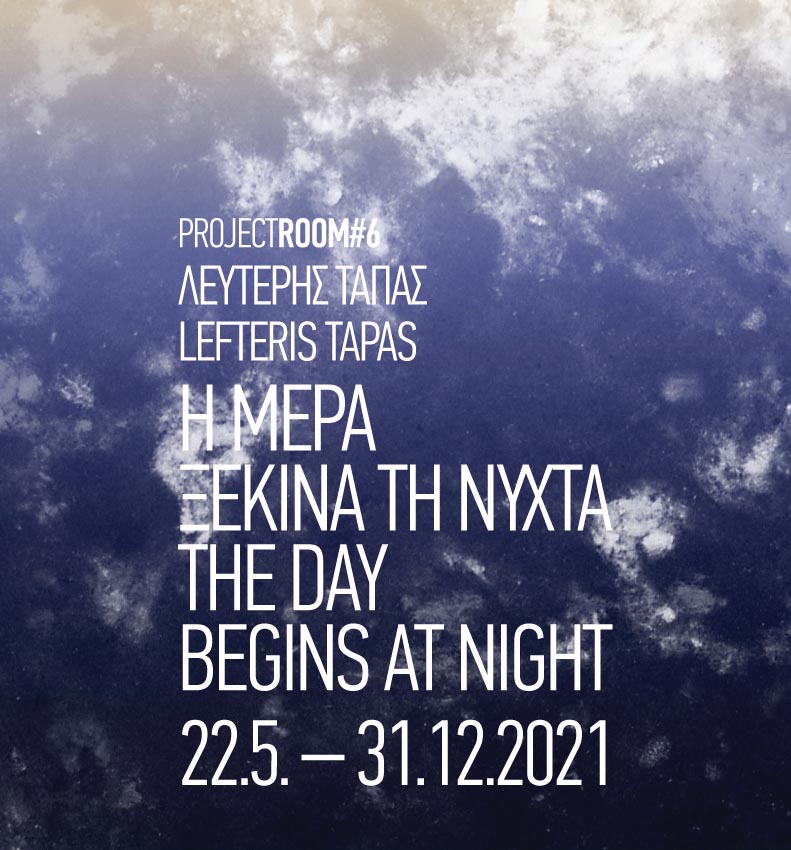 In the context of the Project Room programme, NiMAC [The Nicosia Municipal Arts Centre, Associated with the Pierides Foundation] presents the exhibition The Day Begins at Night by artist Lefteris Tapas.

Through Project Room, the Centre invites artists to use the premises of NiMAC as a three-dimensional field of expression, where they can develop their artistic, conceptual and philosophical quests in the spatial reality of the three dimensions.

Lefteris Tapas chooses to focus on the union of opposites –light with darkness– and through a repetitive and reflective search process invites the viewer on a fascinating journey towards the light.

As the artist characteristically says, the course in the exhibition space is “a circular process, a Sisyphean labour that evolves in stages, starting from a space that alludes to the night, and as the viewer crosses it, the setting gradually changes into day. An endless cycle that once it ends starts again from the beginning. The order of the works is related to the hours, it is an ambiguous course through time, from dusk to dawn and from east to west.” The viewer wanders through the setting of a landscape that suggests a magical world of natural phenomena or elements, such as twilight, sunrise and sunset, in which the unpredictability of the sea is connected with poetic correspondences, the horizon that separates the known from the unknown, or the memento mori of an eclipse.

The exhibition The Day Begins at Night features pencil and ink drawings, paper and jesmonite sculpture installations, large cuttings, audio and video animation installations, thus composing an atmosphere or environment that studies time, space, hope and the need for an inner transformation-transfiguration.

In these difficult but also threatening times for our planet, Lefteris Tapas points out the need for man’s substantial “return” to his origins, to redefine his relationship with nature and with himself. A relationship that leads to the union of opposites, in which the ritual coexists with technology, and artificial intelligence is in constant dialogue with the intelligence of our ancestors.

Lefteris Tapas (b. 1974) lives and works in Limassol. He studied Fine Arts at the Kent Institute of Art & Design and the University of Kent, UK. He has participated in numerous group exhibitions in Cyprus, Greece, Austria, Belgium, the Netherlands and Bosnia and Herzegovina, while his works are in public and private collections throughout Europe. In 2009, he completed a monumental permanent installation for Larnaca International Airport based on a proposal by curator Yiannis Toumazis. The installation was inspired by the flora and fauna of Cyprus and adorns the glass panel that covers the entire check-in area on the ground floor of the airport of Larnaca. His latest exhibition Archipelago was his fifth solo exhibition. Lefteris Tapas is represented by CAN Christina Androulidaki Gallery in Athens.

Through the annual Project Room programme, the Nicosia Municipal Arts Centre, Associated with the Pierides Foundation attempts to detect the Cypriot art landscape. With this programme, which started in 2009, the Centre proposes a new “project”, a framework, which springs from within the space itself and marks, each time, a new beginning in the way it operates.

Project Room, a different space each time or even the whole of the premises of the Old Powerhouse, is set apart, acquires its own substance and is transformed into an incubator, an environment that promotes synergies, diversity and risk. An open and flexible space, within which emerging and established artists can interact, communicate and exchange ideas through existing works, or works specifically made for the space.

Through its alternative proposals (discussions, theoretical presentations, exhibitions, performances, etc.), Project Room essentially challenges the ways in which we perceive and understand art today. In addition, Project Room seeks to promote artistic research, experimental expression and investigation, thus contributing to the quest for new directions in contemporary art and to the substantial involvement and understanding of contemporary modes of thinking.

Project Room #2 (2010) invited artists Antonis Antoniou and the Paravan Proactions team (Melita Couta and Haris Kafkarides), who collaborated to present RainZonanceS 3, an installation comprised of three basic elements – a soundscape environment, a platform/stage area and a series of parallel events with guest artists.

Project Room #3 (2011) hosted artist Panayiotis Michael, who put forth a project dealing with the visual and narrative side of theatrical acts entitled Scenic Affairs.

Project Room #4 (2011), produced in collaboration with Goethe Institut, invited the well-known artist/photographer Ricarda Roggan, who presented her artwork Preparation Stage, which was made in Cyprus