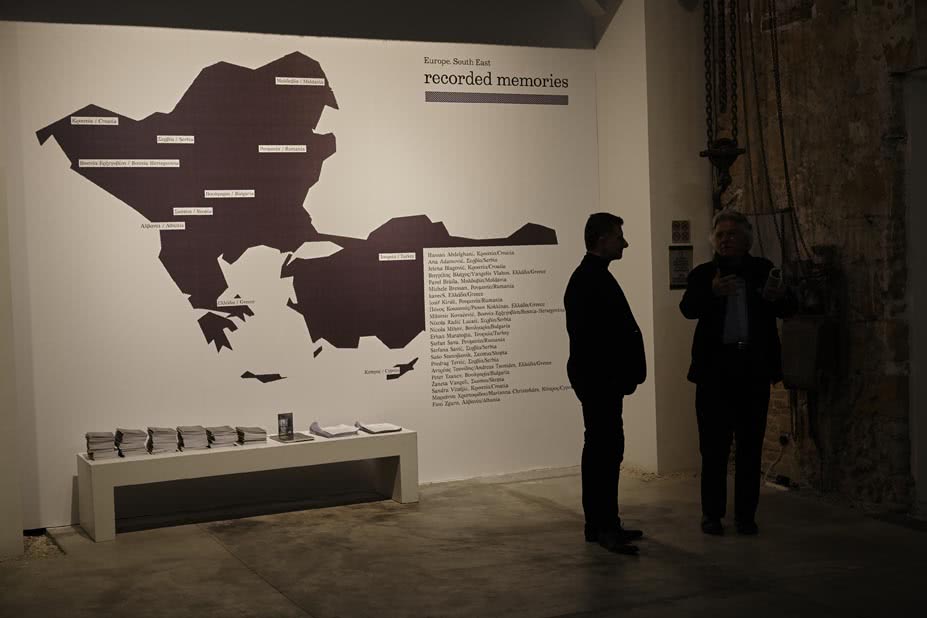 The exhibition features works by twenty-three artists from eleven countries in Southeastern Europe, who address various aspects of collective memory, places of memory, different cultures of memory, as well as the role of image in these processes. With the use of photographs and videos, the artists examine through their works the ways with which the past continues to be present in this particular region of Europe that has been marked by conflicts, hostilities and wars. The exhibition brings together artistic works that present very different historical narratives and, beyond that, different uses to which the camera can be put: as a device for producing matter-of-fact recordings or biographical accounts, for subjective documentation or historical analysis or as a means of capturing the vestigial traces of an action.

According to the curator of Recorded Memories – Europe. Southeast: “The title of the exhibition carries with it the idea that there is a substrate, a medium that can record memory or assimilate it. The photographic film is, in fact, a “sponge” that soaks up the visible and traps it as the past. But memory is an organic process, one that is subjective and irrational, and far more complex than a simple matter of retrieving a stored past or pressing the shutter. Record!”

The thematic arrangement of the exhibition offers a variety of perspectives from which one can view the works on display. Some approaches are defined by their theme, others by the artistic attitude of the artist, while others by the medium they make use of. The diversity of uses to which photography can be put becomes evident only when the viewer takes a comparative overview of all the works on show.

Perhaps, it is the split-second fragmentariness inherent in the nature of photography and film that connects many of these different approaches together. And this regardless of whether the artist is working with found images or using the camera to document and produce new images. The “fragment” of recorded reality is either the starting point for a wide range of artistic “excavations” of the past or the articulation of a perspective that sets up an opposing view to confront official historiographical interpretations.

The selection of the works is based on the proposition that the camera media of photography –photography, film, and video– have a special relationship to the past and are important means of conveying individual rituals of remembrance and cultures of collective memory. This “recording gaze” transforms the present into the past and yet a narrative is always needed to give these fragments a point of view. In this sense, the artists are not far removed from historians, who organize the sources of the past and translate them into a story.

The exhibition Recorded Memories – Europe. Southeast is the result of an initiative by the Goethe Institut in collaboration with the Museum of Photography in Braunschweig, where the exhibition was originally on view before it started its tour through the eleven participating countries.

The exhibition will be closed to the general public during the 3rd International Conference of Photography and Theory (5-7 December 2014).

During the conference the Arts Centre and the exhibition will be open only for the participants of the conference.For further information and registration click here