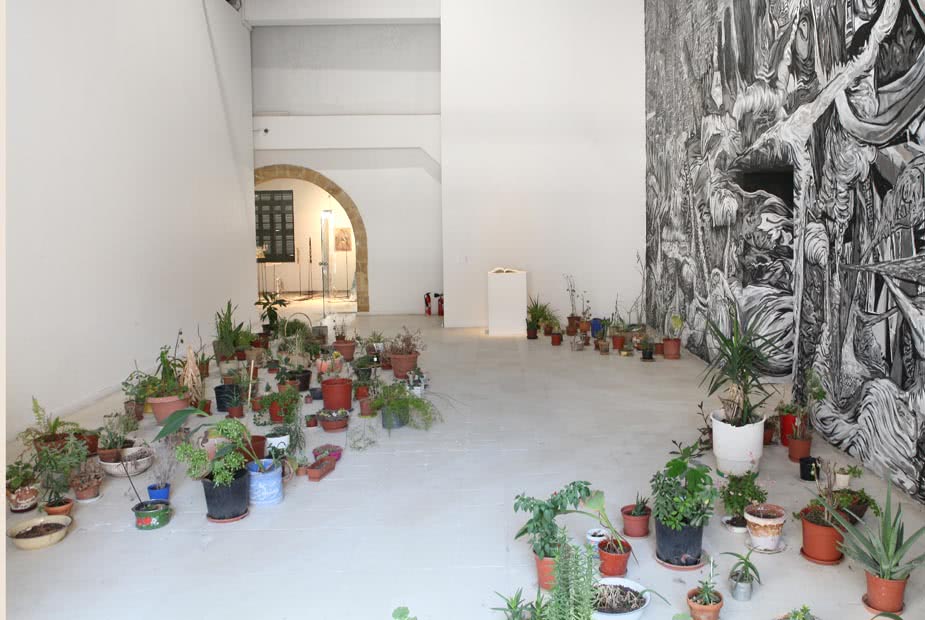 The Nicosia Municipal Arts Centre, Associated with the Pierides Foundation [NiMAC] organises and presents the exhibition Other Indications. Various methods and alternative approaches are adopted with an aim of renegotiating and re-examining the procedures of curating art exhibitions. The exhibition will open its doors to the public from 30 November 2013 to 30 March 2014 and is the result of the collaboration of a team of Cypriot scholars, formed upon the initiative of the Centre.

The team consists of Elena Parpa, researcher and curator, Elena Stylianou, Assistant Professor in Art History and Theory at the European University Cyprus, Yiannis Toumazis, Director of the Nicosia Municipal Arts Centre, Evi Tselika, Fine Art Programme Coordinator at the Department of Design and Multimedia of the University of Nicosia, and Nadina Paphitou, Archival Consultant and former Head of BOC Historical Archive at Bank of Cyprus. The result of this collective effort is an experimental approach to curatorial practices, through art projects that meet at the Centre’s premises as “other indications”, highlighting the varied approaches used in the production of artworks, exhibitions, knowledge and history.

The exhibition Other Indications is based on specific principles and themes. Among others, it critically reviews the historical aspect of producing exhibitions in Cyprus, and it approaches the redefinition of the exhibition space in an experimental way, through spatio-temporal narratives and alternative memory routes. The collective and experimental approach adopted for the development of the exhibition attempts to revise and at times to reverse the familiar and expected patterns of interpreting art exhibitions, using interventions that encourage research, learning and participation.

More specifically, the library of the Centre is “re-read” by Nadina Paphitou. Part of the library is relocated to the main exhibition space and is converted into a reading room for the visitors, as well as into an archive with multiple references to the artworks on display and the themes of the exhibition. Text and image, process and final result, explanation and various interpretations are put forward for negotiation, and the visitor is invited to play both a substantial and an active role.

The collaborative process that shaped the exhibition Other Indications, as well as the concepts, themes and open questions regarding curating exhibitions are recorded and presented in the exhibition catalogue, edited by Elena Stylianou. The catalogue is approached as another tool for open and interactive interpretations that allow audiences’ active engagement with the possible readings of the works on display.

Elena Parpa’s proposal Exercises on Orientation approaches the concept of landscape as a mnemonic and psychographic space, which is composed through personal narratives, memory overlapping, but also through travels –real and imaginary– which at times activate the desire for repositioning in space and time. The proposal attempts to create the conditions for such a reorientation and is based on two projects. The first is titled Transcapes/The Halted Traveler by Maria Loizidou and takes the form of a workshop of “memory recall”, which the artist developed in collaboration with the curator. In this project, a group of artists, poets and architects participate: Meletis Apostolides, Leto Kattou with Leontios Toumpouris, Christodoulos Makris and Marianna Christofides, Kyrillos Sarris with Giorgos Hatzimichalis, and Yves Sabourin. The second project, entitled Overtones, is realised in collaboration with the sound artist, Antonis Antoniou, and uses the book Journey into Cyprus (1975) by British travel writer Colin Thubron as a trigger for journeying anew into the Cypriot landscape. The outcome of this journey takes the form of a sound installation in the Centre, with the same name.

Evi Tselika proposed “mapping the history of producing art exhibitions in Cyprus”, which eventually developed into a two-day marathon of recording this particular history by the Re Aphrodite group (Christina Lambrou, Chrystalleni Loizidou, Elena Parpa, Maria Petrides and Evi Tselika). This experimental and collective effort is presented as a research intervention at the Centre, a project in progress, related to the pedagogical and collaborative turn of contemporary art. This social and learning turn of art places emphasis on the concept of experience, including such elements as cooperation, dialogue and communication. This collaborative, investigative activity is characterised by a form of investigation relevant to the ways in which artistic and curatorial production present us with how a community and an alleged history are formed.

Yiannis Toumazis collaborated with Tom Dale, Kyriaki Costa, Toula Liasi, Liz Nicol, Polys Peslikas and Efi Savvides. These six artists, each in a very different way, engage with and illustrate the process of collaboration between curator and artist as this appears and is expressed through theoretical and practical pursuits, sometimes pre-planned and at other times happening by chance. The proposal aims to highlight and explore the intersection points of the artist’s personal research with those of the curator in specific spatio-temporalities, creating a rhizomatic field in space. This moving, hybrid system is the effect of a specific curatorial methodology through which new artworks co-exist with selected artworks from the previous exhibition at NiMAC. This act might embrace an emotionally charged curtain, an entrance into an area of transcendence and of internal transformation.

The works by Sumer Erek, Glavkos Koumides, Phanos Kyriakou, Youssef Limoud and Martin Meason, first shown in the project Terra Mediterranea – In Crisis, are also exhibited in Other Indications.

The exhibition coincides with the 20th anniversary of the Centre. On the 14th of January 2014, the Municipal Arts Centre, Associated with the Pierides Foundation [NiMAC] completes twenty years of creative presence in the contemporary art scene of Cyprus. During these two decades, the Centre organised and presented over 70 exhibitions of contemporary art from Cyprus and abroad in collaboration with respective museums, art centres and cultural institutions of international repute. As it is generally known, the main objectives of the Centre are the establishment of channels of artistic communication between Cyprus and abroad, the development and encouragement of collaboration among artists and between artists and cultural producers from Cyprus and abroad. The Centre also provides children, youngsters and adults alike with an opportunity to become better acquainted with contemporary art through its educational programs.

Apart from major exhibitions, the Centre has been in charge of multiannual European funded research programs, such as Crossings and Suspended Spaces, while in recent years it has turned its attention to more experimental approaches to art through the programs Project Room and Open Call. In addition, the NiMAC Residency program hosts artists and theorists from the international arena. NiMAC’s Educational Centre for Children, which has been operating since 2008, offers educational programs in Engraving and Cinema for children and adolescents from Cyprus, and for children of immigrants living on the island. Currently, it is participating in the Nicosia Pop-Up Festival with NiMACt at 31A Makariou St. Furthermore, the Centre is working on the establishment of the Theatropolis (City Theatre), which will be housed in an old carpenter’s workshop on Tempon St., in the heart of the Old City of Nicosia. Its aim is to bring together the performing and visual arts.