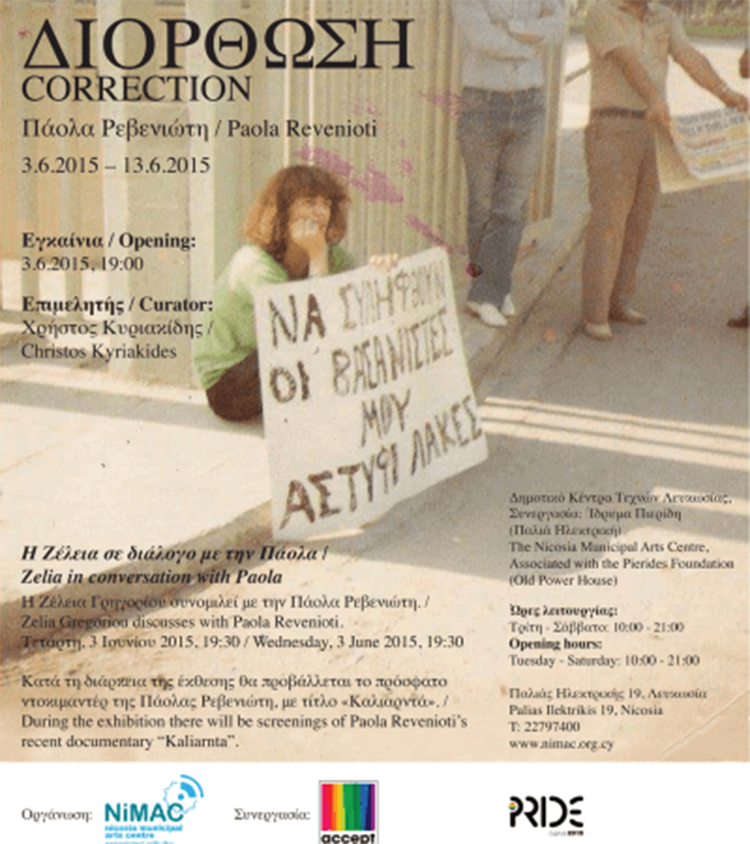 The Nicosia Municipal Arts Centre – Associated with the Pierides Foundation in collaboration with Accept-LGBT Cyprus organizes and presents the photo exhibition “Correction” with works by the Greek trans activist Paola Revenioti. The exhibition, taking place in the context of the Cyprus Pride Festival 2015, is curated by Christos Kyriakides. During the exhibition there will be screenings of Paola Revenioti’s recent documentary “Kaliarnta”.

The opening of the exhibition will be held on Wednesday, 3 June 2015, at 19:00, at the Municipal Arts Centre (NiMAC). The works will be displayed until Saturday, 13th of June. Also, as part of the exhibition opening, Professor Zelia Gregoriou will have an open discussion with Paola Revenioti entitled “Zelia in conversation with Paola”. The dialogue between them will be open to the public and will begin at 19:30.

As it is already known, this is the same exhibition that opened its doors on 20 November 2014, at the Municipal Market of Nicosia, as part of the events of the Accept-LGBTCyprus for the International Day of Remembrance commemorating Transgender Victims. The exhibition was forcefully interrupted the day after the opening by the police, which confiscated the works, on the grounds of public exhibition of lewd content. A general outcry followed, while NiMAC reacted instantly by issuing a written statement, in which it condemned both the censorship and the confiscation of the exhibition works, stressing that the role of an artwork in contemporary society is to activate and critically raise the public’s awareness in relation to the current socio-political realities. The statement expressed the hope that this would provide an excellent opportunity for a fruitful dialogue on the importance and necessity of protecting freedom of artistic expression and creation.

In this context, therefore, NiMAC considers that the Cypriot public should have the opportunity to see the exhibition, the “dismantling” of which, according to the Commissioner for Administration (Ombudsman), was “an unnecessary, disproportionate and repressive act”.

Curator Christos Kyriakides had this to say about Paola and the exhibition:
“Through her work, Paola has become the bridge between the dreamlike dimension and raw realism.
Through her lens, boys appear as unwitting accomplices in the structuring of a modern visual culture. They seem unaware of the potential of their image, unaware of the manner in which their identity is unpretentiously communicated to shape the aesthetics of the current viewer.

Slogans on walls and mundane Athenian sitting rooms swirl with night lovers, young boys, random encounters and political protests. Her archives record thirty years of events without excess or stylistic interventions. Her subjective dimension is in constant dialogue with the social environment. For thirty years, Paola acts as a contemporary artist.

The magazine ‘Kraximo’, which she started publishing in the 1990s, radically shaped not only the perception of a magazine’s structured content, but also of the act of prostitution, since it was financed by Paola’s own prostitution. Its cover proclaimed that any job done solely for profit is, in fact, prostitution, whilst its content, simulating her life, featured renowned intellectuals such as Félix Guattari next to lustful male bodies; uncensored and without stylistic editing.

Ranging from political messages and pornography to social awareness, protests and pleasure, Paola portrays the history of gay activism in the Greek arena.

With her current team ‘The Paola Projects’, she continues to record and convey her thoughts in a series of You Tube documentaries. The documentary ‘Kaliarnta’ records, for the first time, the history of this type of argot in an audiovisual format.
The complexity of her work appears to be enormous.”

Additional Information about Paola Revenioti:
Paola Revenioti is a Greek transgender activist and artist, considered a legend of the Athenian underground scene.

Excerpt from an article published in the renowned British magazine “Dazed & Confused” on the occasion of the Paola Revenioti exhibition in London in 2013:
“During the 1980s, transgender Greek artist and prostitute Paola Revenioti published the trans-anarchist fanzine Kraximo. Funded by her own prostitution, the fanzine pioneered the fight for gay and trans rights, combining interviews with Greek poets and intellectuals alongside Athens street hustlers and her own photography, since compared to the work of Larry Clark and Walter Pfeiffer. Today, she continues to work as an artist and activist, making Athens-based documentaries with her ‘Paola Projects’.”

Excerpt from an article published in the international leading magazine of contemporary art and culture Frieze on the occasion of the recent Paola Revenioti exhibition at the Breeder Gallery:
“Revenioti’s photographs – mostly black and white, but occasionally colour – are carefully composed: she shoots young men in front of political graffiti or in the living rooms of typical Greek homes. The nude studies reveal the rich communication that exists between Revenioti and her friends, clients and lovers; this results in images that can be both pornographic and political. In the 1970s, anarchism, police abuse and immigration were swept under the carpet in Greece. In her work, Revenioti chooses to focus on the controversial topics of the day, alongside her frank discussion of the biggest taboos of all: prostitution and homosexual love. What becomes apparent is that she is neither flaunting her work as a prostitute nor elevating it to a heroic status. She has simply taken advantage of her hourly occupation in the streets of downtown Athens to observe, relate to and reveal problematic situations that affect a large section of Greek society. She does so through her community of urban misfits, not in a manifesto-like way, but via an unstrained sense of ‘revolutionary homosexual expression’ as she herself describes it.”

The Paola Projects: Paola’s team has long been creating a series of extremely interesting documentaries. This recent project, however, is of particular value: It constitutes the only attempted recording of “Kaliarnta”, after that of Elias Petropoulos (1971), whilst covering live the history of this dialect (the manner in which it was spoken, the accompanying gestures, etc.). The documentary was first screened in Cyprus last November at the exhibition “Correction”, and afterwards at various festivals in Greece, among which the Thessaloniki Documentary Film Festival, where it received excellent reviews.

Αnthropological talk by Yael Navaro-Yashin in conversation with the film screening of What Khidr Says to Moses: Turn Around Me by Emrah Gokdemir