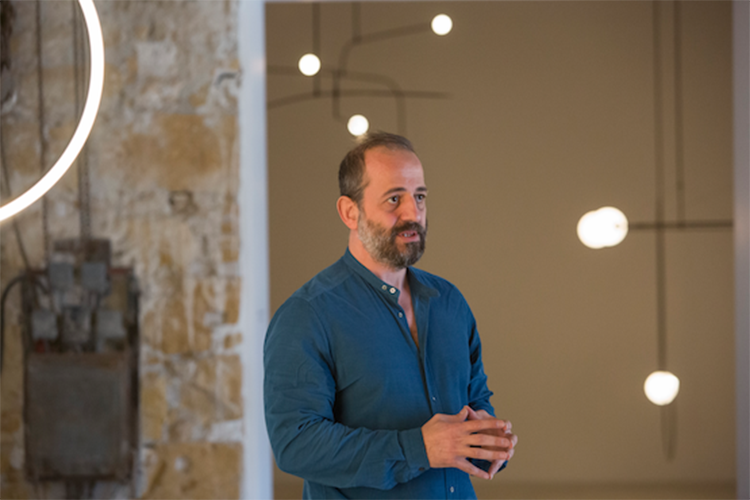 Within the framework of the exhibition ‘Things that go together’ by Michael Anastassiades, organised by NiMAC [The Nicosia Municipal Arts Centre, Associated with the Pierides Foundation], the Cypriot designer will present aspects of his internationally acclaimed work to the Cypriot public. The talk will take place at Theatro Polis – OPAP, on Tuesday 16 April, at 19:00.

‘Things that go together’ is an exhibition reflecting on the designer’s twelve-year practice to date – from his eponymous brand to his extensive studio collaborations with established manufacturers. The show presents Anastassiades’ design process through his research, his personal collection of objects and finished works from the studio archive. The talk sees Anastassiades’ talk in detail about his work, principles of his design and significant influences that have shaped his practice.

Michael Anastassiades founded his studio in London in 1994. He trained as a civil engineer at London’s Imperial College of Science Technology and Medicine before taking a masters degree in industrial design at the Royal College of Art. His work is featured in permanent collections at the Museum Of Modern Art in New York, the Art Institute of Chicago, the Victoria & Albert Museum, London, the MAK in Vienna, the Crafts Council in London and the FRAC Centre in Orleans France. Recent solo exhibitions include ‘Reload the Current Page’, Point Centre for Contemporary Arts, Nicosia, ‘Time And Again’ at the Geymüllerschl.ssel/MAK in Vienna, ‘Doings on Time and Light’, Rodeo Gallery, Istanbul, ‘To Be Perfectly Frank’ at Svenskt Tenn in Stockholm, ‘Kinetic Light 2 – Gold Pendulum’, Norfolk House music room at the Victoria & Albert Museum in London, Cyprus Presidency at the European Parliament in Brussels Belgium, ‘13 Mobiles’, Atelier Jesper Brussels. Notably, his work has been commissioned by the A.G. Leventis Gallery, Nicosia with site-specific installations at the Hagia Sophia cathedral in London.

Anastassiades is a Royal Designer for Industry (RDI) at the Royal Society of Arts. He is involved in educational programmes at international institutions such as Central Saint Martins, University of the Arts London and ECAL, Lausanne.