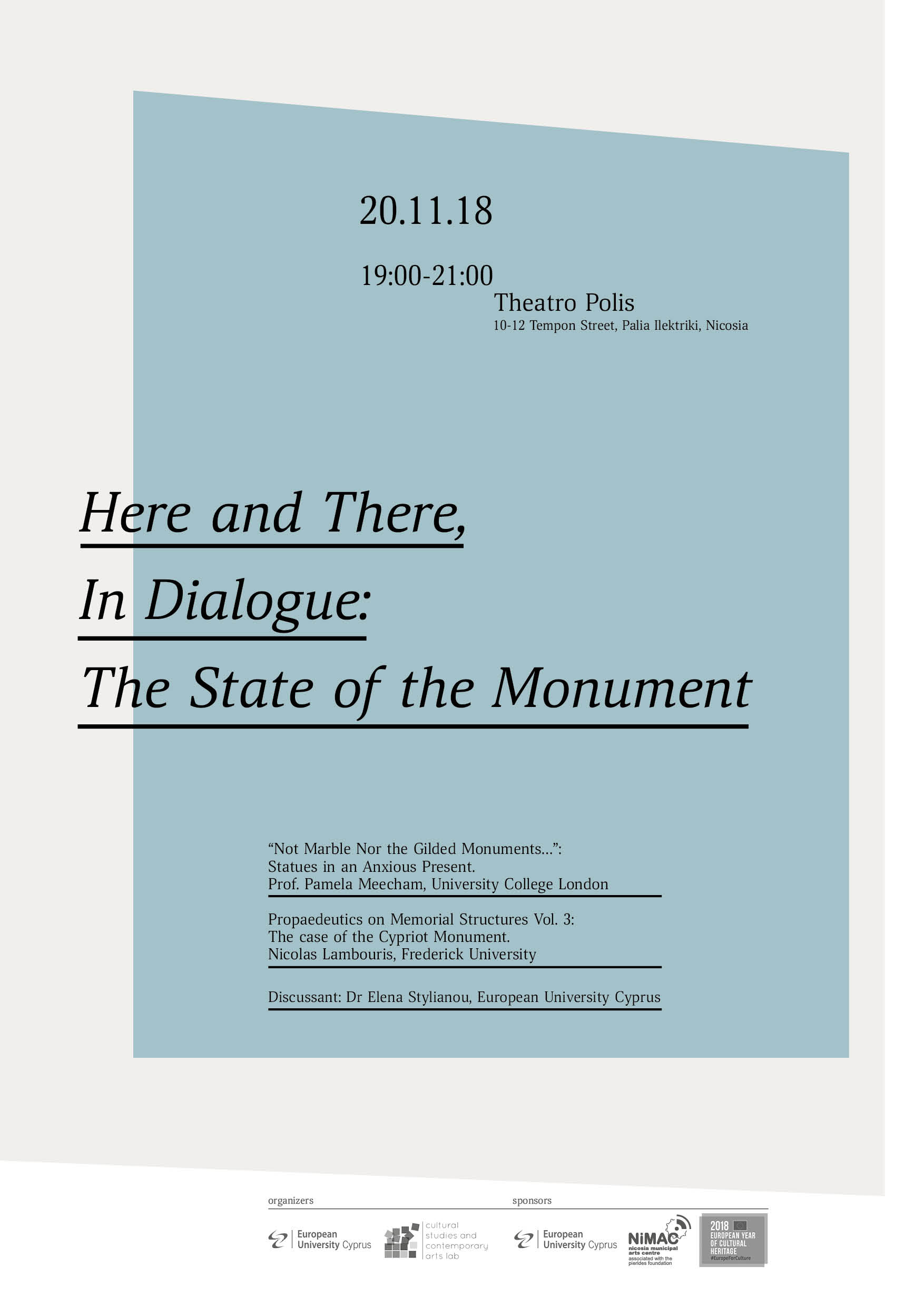 In the framework of the 2018 European Year of Cultural Heritage, the Cultural Studies and Contemporary Art Lab (CSCA Lab) of the European University Cyprus, in collaboration with NiMAC, organizes a discussion between Prof. Pamela Meecham, UCL, and Cypriot artist/photographer Nicolas Lambouris. The discussion entitled “Here and There, In Dialogue: The State of the Monument” will take place at Theatro Polis, on Tuesday, 20 November 2017, 19:00-21:00. For further information please see below:

“Not Marble Nor the Gilded Monuments…”: statues in an anxious present.
Prof. Pamela Meecham

In a period of unprecedented socio-cultural change readily characterized as an Era of Uncertainty, unitary centralized values are hard to find. The familiar if overlooked statue, for instance, once performing as little more than street furniture, has recently been brought into sharper civic focus. Rather than a once benign signifier of the nation-state, currently the memorial monument is pressed into service for radical change becoming the visualization of inequalities and injustice. Once permanent monuments have been toppled, re-purposed or replaced. My talk will consider what is at stake in visually decolonizing the public square. It asks what artworks and transforming pedagogies might be needed for cultures in transition.

“Propaedeutics on Memorial Structures Vol. 3: The Case of the Cypriot Memorial Monument”.

Inextricably political in their discourse on collective memory, monuments in Cyprus are often directly associated with national history(-ies), national narratives and symbols operating as public platforms onto which selected contexts, identities, and claims are being negotiated. As these man-made structures become constructed signifiers of political, cultural, social and national agendas, they are transformed into asserted historical evidence that eventually permeates into collective consciousness and actively participates in historical representation. The photographic project “Propaedeutics on Memorial Structures Vol. 3” (2016-2018), examines the nature and manifestation of the Cypriot monuments as cultural artefacts in relation to their photographic representations. The project also investigates the act of photographing—an act of production and its consequent mediated operation—and appropriating photographic documents of cultural history as evidence of historical events. Through latent significations in both object and photographic record, the project aims to critically reflect upon the contested articulation of collective, national and cultural narratives through monuments and memorials.